The Best Places to See a Bear in Yellowstone

Bears have long been a symbol of Yellowstone National Park. It’s one of the best places in the world to observe wild bears. Inhabited by both black bears and grizzly bears, Yellowstone is a bear-watcher’s paradise. For many people, seeing bears is one of the main reasons they come to Yellowstone. It’s possible to see ten or fifteen bears in one day in this vast preserve.

For much of Yellowstone’s history, bears begged and stole food from people. They would line up along the side of the road and people would throw food out of their cars to them or get out and hand-feed the black bears. Hotel operators dumped trash to attract bears, leading to large gatherings of bears scavenging garbage with hundreds of people watching.

Nowadays Yellowstone bears generally do not beg or 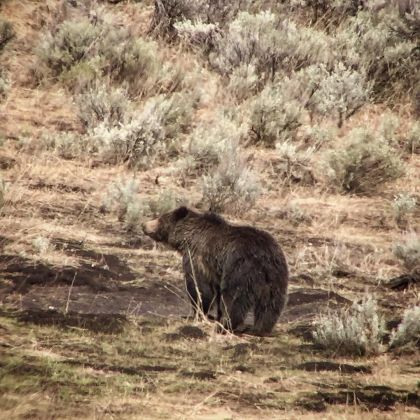 steal from humans, so you have to work a bit harder to find them, but once you do bears show much more natural behavior. They are active throughout Yellowstone in spring, summer and fall then hibernate all winter, emerging sometime in March or early April.

A bear is the ultimate omnivore, eating just about anything and everything from berries to roots to grubs, insects, rodents, pine nuts, flowers, fish, and yes, elk, deer, moose…pretty much any animal they can catch. In the Spring both black and grizzly adults hunt elk calves, which cannot yet outrun the bears and are a fairly easy target. Adult elk are a hard for bears to catch, but some bears will try to steal elk carcasses from wolf packs that are better at elk hunting.

Bears also love a nice dead rotting carcass. Winter-killed elk and bison make a feast for bears newly emerged from hibernation. As many as 20 grizzlies have been observed around a carcass in Hayden Valley!

It’s not always easy to tell a black bear from a grizzly. Black bears come in a variety of colors, but most grizzlies are going to have a prominent shoulder hump, which is the best way to ID them. They also have bigger, stouter claws but if you can see the claws that well you may be too close.

To increase your chances of spotting Ursus Americanus or Ursus Arctos, go out early or late in the day. Like many park animals, bears are primarily crepuscular, meaning they are most active around dawn and dusk. Bears take advantage of cooler temperatures and lower light to move stealthily and look for food. It’s perfectly possible to spot a bear any time of day in the Park, especially in cooler weather, but mid-summer you are unlikely to see bears out in the heat of the day, when they tend to nap in the forest.

You don’t need to go hiking into the backcountry to see bears. In fact you are better off NOT seeing them on the trail. Hayden Valley and Lamar Valley are widely recognized as excellent places to see both kinds of Yellowstone bears. You can drive through these valleys and stop in the paved pullouts to scan for bears. The roads take you up onto high spots where you can glass the meadows for movement right from your car. Look across the valleys along the treeline and watch for movement of large brown or black animals. It’s easy to mistake a bison for a bear at a distance, so be patient and use your binoculars to get a closer look and confirm what you are seeing. 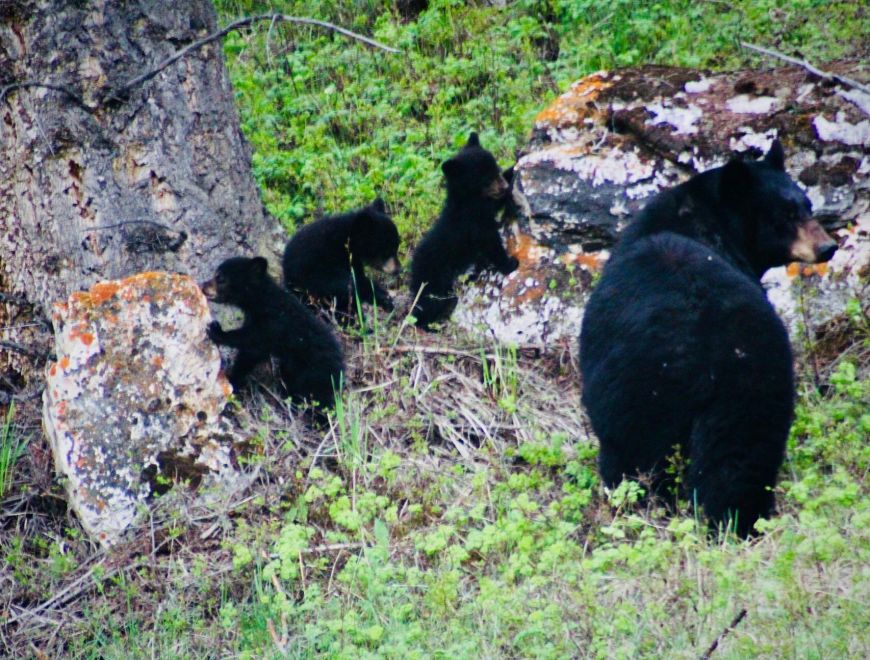 Plan to spend some time looking and waiting. Patience is often rewarded. Bears in open country are almost always either moving or eating. If they have found a good food source such as an animal carcass or a good place to dig for roots they may be visible for a while.

If there is a bear or bears visible, someone will probably spot it before you do. As you drive along, look for folks with spotting scopes and cameras in use. Stop, get out of your car, look for yourself to find the animal. If you don’t spot anything, ask politely and someone will point out the animal for you.

All of Yellowstone is bear habitat, but some places offer much better chances to see them.

The Lamar Valley is justifiably famous as a wildlife haven. Grizzlies and black bears may be seen anywhere in this vast landscape. Look up on Specimen Ridge or on the slopes of Mount Norris for grizzly bears. Watch for courting bear couples in May and June. If you spot wolves on a kill male bears are probably not far away and may come in and take over the kill.

Little America – the valley just west of Lamar where Slough Creek and Lamar River combine – is also a great area to look for bears. Look up on the sides of Specimen Ridge, or down along Slough Creek.

Go to Grizzly Overlook or stop at Elk Antler Creek and

glass the valley bottoms and treeline. Get up on a high point and watch for a while. This place is crawling with bears so be careful any time you leave the road. Watch for sows with small cubs in the spring – they may have as many as four little ones!

In southern Yellowstone, you may spot bears along the shores of Yellowstone Lake. In the late spring bears fish the small creeks that flow into the lake. The north shore of the lake can also be great bear watching. Stop along Mary Bay or Sedge Bay to look for courting bears.

This high pass between Yellowstone Lake and the East Entrance is a hot spot for bear activity in the spring as the snow melts and bear find fresh greens and flowers to eat.

There’s lots of bear habitat around Mammoth. I have seen bears chasing elk right through town! Take a walk around the Upper Terraces or the Beaver Ponds Trail and keep a sharp lookout for black bears.

As you drive south from Mammoth you will go through the Golden Gate and emerge onto the vast meadows of Swan Lake Flats. This is superb grizzly bear habitat. Watch for them cruising the sagebrush covered flats or up on the foothills of the Gallatin Range to the west. Bears are also frequently seen along Obsidian Creek to the south.

Your best bet for spotting black bears is in around the Tower and Roosevelt area, sometimes referred to as the “Bearmuda Triangle.” It’s common to see black bears close to the road here. These bears tend to be used to the presence of people, and go about their business as hundreds of people watch them and take photos and movies of them. If you see a black bear in the woods watch for cubs that may be up in a tree.

This high pass between Canyon and Tower attracts bears in the late summer and fall, where both black and grizzly bears gather to harvest pine nuts from the Whitebark pine trees that grow in the upper elevations. Black bears may be up in the trees getting cones while grizzlies would mostly be in the forest. 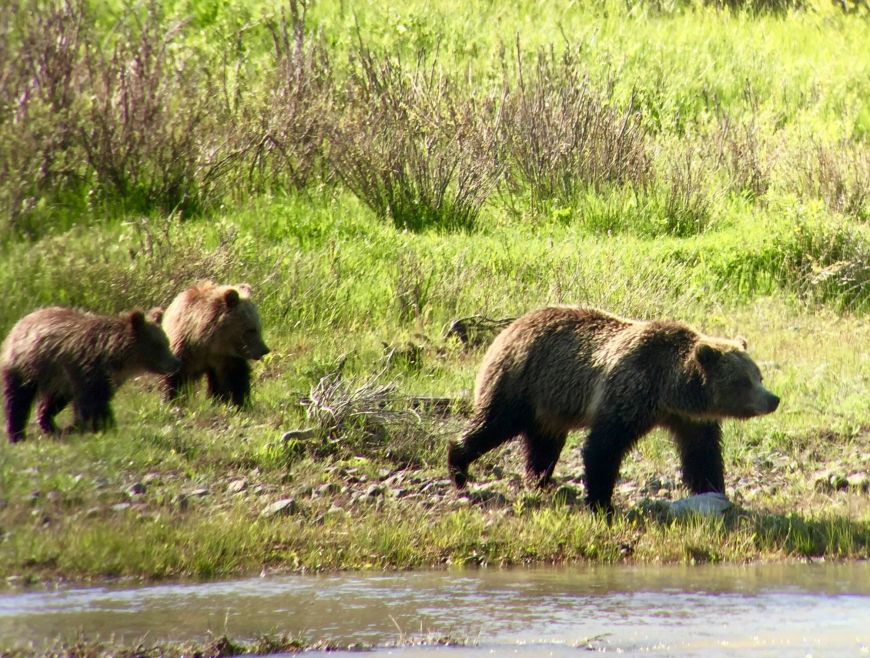 The meadows around Canyon Village and along the Yellowstone River often produce bears in spring and summer. There are lots of good plants for the bears to east and plenty of pocket gophers to dig up, as well as elk calves to hunt in early summer.

When you come upon the inevitable “bear jam” along the road try not to clog things up further. If you can find parking, get off the road and enjoy. If not, get a look and move on – don’t stop for long in the road.

Use your head around bears and you will be fine. Bears generally don’t want any trouble, so give them their space and they will respect yours. The National Park Service requires you to stay 100 yards from any wild bear when you are outside of a car or building. When you head out on the trail, keep your wits about you, keep your bear spray handy and know how to use it, travel in groups of at least 3, and make some noise to avoid surprising bears.

Blog Post and photos by Phil Knight. Phil Knight is Bozeman local, outdoor enthusiast, and guide for Yellowstone Guidelines. For tours and adventures in Yellowstone with Phil, contact us at 406-599-2960 or tours@yellowstoneguidelines.com.