Next time you visit Yellowstone, spend a little time looking at the ground. There’s a good chance you will find obsidian shards. These are sharp bits of black glass that lie scattered about. Please look at them, feel their sharpness, then put them back. Obsidian shards are the result of tool making by Native Americans as much as 11,000 years ago! 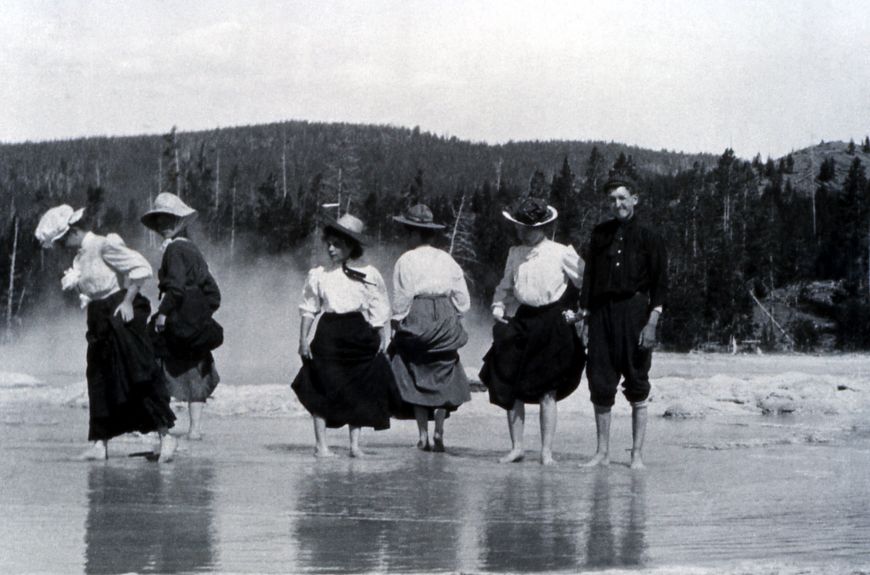 History of Native Americans in Yellowstone

The earliest visitors to Yellowstone were Native Americans – Clovis peoples – who came here to quarry the excellent obsidian to make arrowheads, spear points, scrapers, awls and similar tools. They also hunted the wildlife for food, clothing and tools. A site on Yellowstone Lake has been dated to 9,350 years ago, and the tools found there had traces of blood on them from bighorn sheep, rabbits and other game.

Twenty six Native American nations have a history in the Yellowstone area. Some of them, such as Blackfeet, Crow and Sheepeater, were using what became Yellowstone Park when John Colter became the first Euro-American to explore the park in 1807-1808 (he did it alone in winter).

The Early Mountain men of Yellowstone

Colter’s stories of steaming, sulphury hotpots gave Yellowstone the early name of “Colter’s Hell.” His actual route through Yellowstone remains unclear, but Colter began the revealing of Yellowstone to the outside world. He was soon followed by mountain men like Osborne Russell, whose book “Journal of a Trapper” is a classic of Mountain Man days. Trappers came in search of abundant beaver and other wildlife which they trapped for their furs. These rambling trappers left few reliable records of their travels since they wanted to keep the best trapping locations to themselves.

Jim Bridger was a successful trapper and mountain man who was infamous for his “tall tales.” He loved entertaining greenhorns and city slickers with made-up stories of the mysterious Yellowstone country. Many of Bridger’s stories had a kernel of truth. He talked of a river where you could catch a fish and it would be cooked by the hot water on the surface by the time you landed it. He spoke of a “cursed” mountainside where all the animals and plants, and even the air and birdsong, were turned to stone. Today we can recognize reference to the Firehole River (it is warm from hot springs) and Specimen Ridge (petrified tree stumps and logs everywhere). 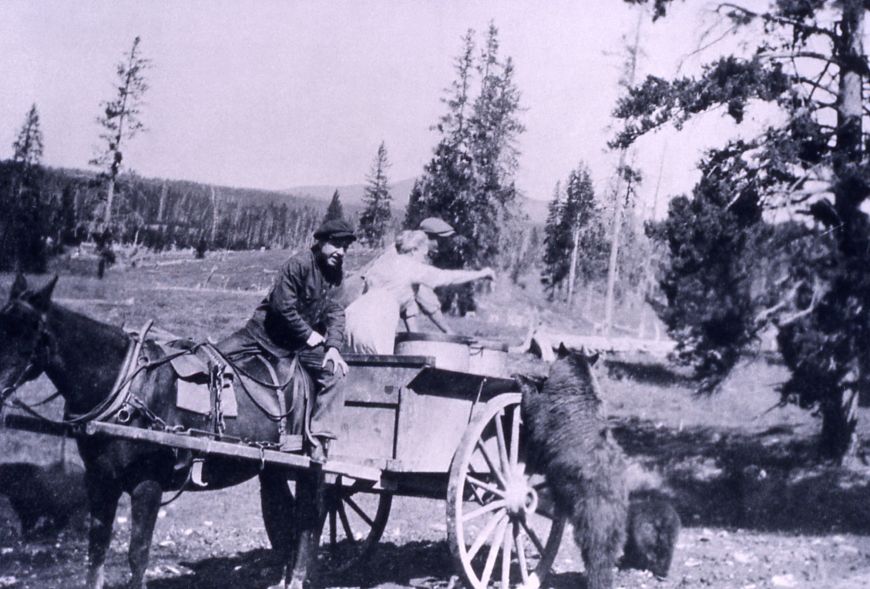 Enough surprising stories emerged from the Yellowstone area – immense waterfalls, a gigantic shimmering lake high in the mountains, great fountains of hot water jetting out of the ground – that Montana settlers finally organized an expedition in 1869. Led by Folsom, Cooke and Peterson, respectable businessmen, this trip led to more ambitious expeditions in 1870 and 1871, and Yellowstone was finally revealed for the wonderland that is. By 1872 it was protected as the world’s first national park.

In 1877, war came to Yellowstone when the Nez Perce Indians arrived en masse, pursued by the US Cavalry. While it was a short lived war there were indeed casualties. Two tourists were shot and killed by the Nez Perce. Another, George Cowan, was shot three times and left for dead, his family kidnapped and all his horses and supplies stolen. Cowan was a tough Montanan, and survived his ordeal by crawling several miles to get help. He found the remains of their camp and managed to build a fire and brew coffee from dregs they had spilled while camping. Cowan was rescued by the Cavalry and later reunited with his wife, Emma. He turned a bullet that had flattened against his skull into a watch fob.

The early tourists to Yellowstone were a hardy lot, traveling long miles on rough, dusty, muddy trails by horseback or stagecoach.  Stagecoach robberies were a frequent occurrence. The so-called Merry Bandit staged one of the last such hold ups at Shoshone Point between Old Faithful and West Thumb in 1914. Edward Trafton, his real name, held up 15 stagecoaches in succession and initially escaped with a haul of money and jewelry. Trafton was later apprehended when his own wife turned him in as revenge for his cheating with another woman.

Mammoth Hot Springs or Yancy’s Hotel near Tower where you were lucky to have a roof over your head and the whiskey glasses never touched water. Old Faithful’s first hotel was actually called The Shack. Some hotels served wild game shot or trapped in the Park.

The Lake Yellowstone Hotel, built in 1890 and expanded in 1903, is the oldest existing hotel in any national park. Here you can live history in an elegant setting on a bluff with a grand view across the highest major lake in North America. Other old hotels are gone, such as the immense Canyon Hotel, burned down in 1960, and the Fountain Hotel, which had hot baths with water piped from a hot spring at the Fountain Paint Pots.

Anywhere you go in Yellowstone, history sleeps at your feet. Early travelers left signs of their passing. I have found old whiskey bottles, axe heads, stone tools, parts of old wood stoves, an old poacher’s cabin, teepee poles, even an engine and drive shaft from an old Plymouth. There is a shipwreck on Stephenson Island.  You can walk the foundation of the old Fountain Hotel. There are old road beds and railroad grades, abandoned bridges, old dump sites with crockery shards, old timbers and rusted machinery.

Keep an eye out for history in Yellowstone and you will find it. The law requires that you leave anything you find where it is. Pick it up, photograph it, put it back for others. If history is your thing, check out the selection of books in the Park bookstores – try Mountain Time by Paul Schullery or Empire of Shadows by George Black. Truman Everts’ book Lost in the Yellowstone is a gripping tale of survival in the wilds before the park was developed. Or if you crave those grim stories of visits gone bad, try Death in Yellowstone by Lee Whittlesey.

Make the most of your Yellowstone stay. Create your own stories, take photos, take notes, post stories and photos, keep a journal. You are part of history too.

Blog post by Phil Knight. Phil Knight is Bozeman local, author, outdoor enthusiast, and guide for Yellowstone Guidelines. For tours and adventures in Yellowstone with Phil, contact us at 406-599-2960 or tours@yellowstoneguidelines.com.