Moose on the Loose


It is said that moose were an animal designed by committee, because no one could agree on their looks. Gangly tall, oddly shape, and a master of it’s elements, moose (Alces alces) are my favorite ungulate in North America and Yellowstone.

Moose are fairly isolated in Yellowstone National Park. I have only observed moose in a select few locations in the park. In fact, moose are probably one of the hardest animals to see in Yellowstone. Only 4 moose were seen on tour for the summer of 2017. Moose numbers are between 150-200 in the park’s north range and Gallatin Mountains. Plus, finding a forest dweller in the forest is a daunting task. The best places to find moose are in the Gallatin Mountain Range, Tower Area, Pebble Creek and the northwest corner. Pebble Creek area, Elk Creek, and in the willows along Soda Butte Creek are the best winter hideouts of the moose. Moose like to eat aquatic plants, woody creek-side vegetation, and the buds off of sub Alpine Fir and Douglas fir. Long legs with a unique joint at the knee; allow moose to move through deep snow, and deeper water. Plus, they are great swimmers too.

Moose are the first of the ungulates (animals with hooves) to loose their antlers. Moose will start to shed antlers in late-January and February. Seeing a bull or male moose without antlers can be confusing. The best way is to look for the “buttons” or area on the skull where the antlers should be. If there is nothing but fur present on the skull and no visible scar tissues or “buttons”, the moose is a female or cow. 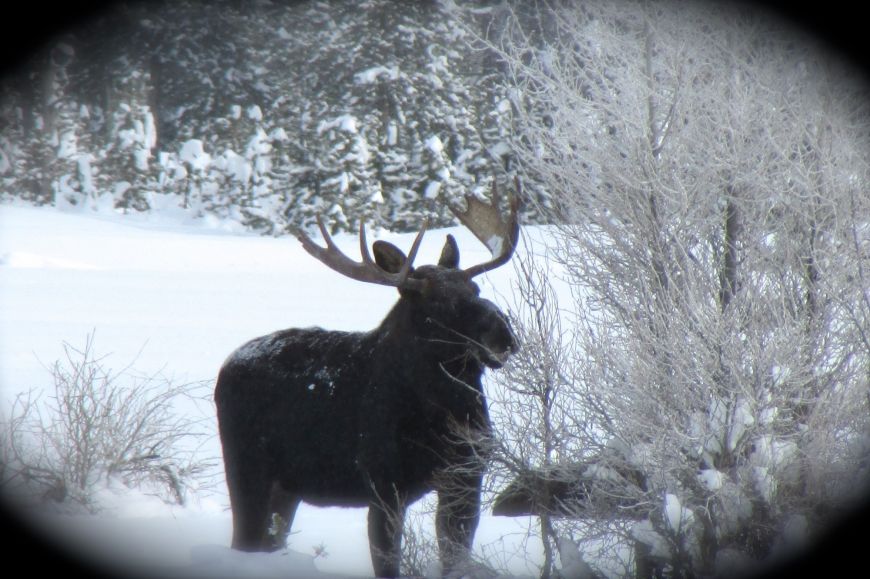 Unfortunately, the moose population in the Northern Rockies and Yellowstone are on the decline. Studies are in place to determine the causing factors. Wolves, increase predation, and climate change are all suspected culprits of the moose’s decreased population.

I’ve had some close moose encounter before. Thankfully they’ve all ended peacefully.  A cow or female moose can be very aggressive defending their young. Weighing up to 1500 lbs., moose are an animal that command respect.

I was once bluffed charged by a moose while hiking in the forest outside of Bozeman, MT and had a 15-minute standoff with a moose blocking my car. Thankfully the moose walked off and allowed me to get in my car. Lastly, a moose ran down the street on the sidewalk opposite of my house, in Livingston, Montana. At first glance, I thought it was a horse. But as the animal moved closer, there was no doubt. Moose on the Loose!!!