Death of a Yellowstone Wolf - A Remembrance to 926F

The wolves of Yellowstone National Park are cherished by millions of tourists each year.


Visitors set out first thing in the morning or end of the day, with the hopeful chance of laying eyes on Yellowstone’s largest canine. The northern range of Yellowstone and Lamar Valley are popular places to see wolves and other large mammals of North America like elk and bison. One pack that controlled the far northeast corner of the park and sections of the Lamar Valley was aptly named the Lamar Pack. In early fall, the pack consisted of 7 wolves, 3 adults and 4 pups. The alpha female, and favorite to many, was wolf 926F. Locals and wolf aficionados gave her the nickname “Spitfire” for her resilient nature and ability to survive.

926F or “Spitfire” was killed late November 2018 by a hunter in Silver Gate, Montana as part of the Montana wolf hunt.  Although the wolf was legally “harvested”, the killing of this four-legged celebrity has drawn outcry for greater protections of wolves directly outside of the park boundary. Wildlife advocates want to create a larger buffer zone between the park boundaries and the legal wolf hunting areas in Montana, Idaho, and Wyoming.


“Goodbye 926F. You were the first alpha female I got to know and observe. I watched you and the Lamars for 6 winter studies. We wrote songs about you to pass the long cold days, helped you cross the road countless times, told thousands of visitors about you, and moved many carcasses further out so you could feed more easily. Run free.” – Lizzie Cato, Yellowstone Wolf Biologist

The mother to Spitfire was ‘06 female. She was also subject of the book, “American Wolf” by Nate Blakeslee. Named ’06 because of her birth year, the female was officially 832F and the founding member of the Lamar Pack. The ’06 wolf was a resilient, savvy, and smart animal with the ability to successfully hunt by herself. A lone wolf’s ability to survive and hunt is a daunting task, but ’06 fought against the odds. Just like 926F, ’06 was killed directly outside the park at the hands of a hunter. 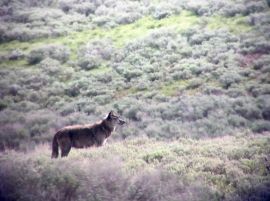 Below is a video of 926F interacting with a grizzly bear and her two cubs. The video was recorded this spring (2018) in the Lamar Valley.

Wolves will always be a subject matter of great controversy.  Many humans love them and many humans hate them. Wolves have always been the antagonists in children’s literature from the Big Bad Wolf to Little Red Riding Hood, while bears are the cute, cuddly hero’s like Winnie the Pooh and Baloo from The Jungle Book. Humans are taught at a young age to fear these creatures, yet we have such affection for their distant domesticated relatives.

Despite a clash in opinions, there is no doubt wolves have stimulated the local economy for the gateway communities of Yellowstone. Visitors spend millions of dollars on lodging, airfare, meals, and guide services with a once in a lifetime chance to see a wolf in the wild. A study by John Duffield in 2006 revealed wolves bring more than $35.5 million dollars to local economies of Montana, Idaho, and Wyoming. There is no doubt this dollar amount is greater as visitation numbers continue to rise in Yellowstone. How much money does wolf hunting generate for the economies of the Yellowstone area? Based on pure numbers of hunters versus tourists, logic would infer wolves are more valuable alive than dead. Another study by famed park biologist, James Half-Penny, estimated the average late-season elk hunter in the Gardiner, MT area spends $39 per day, while the typical wolf –watcher spends about $160 per day.

“Spitfire” will be missed and new generations of wolves will fill the empty void of her absence. Hopefully the passing of 926F will not bring about the wrong impression of people’s attitudes towards wolves in the area. These animals are vital to the Yellowstone ecosystem, local economies, and the wild nature of Yellowstone.

Blog post by Chris Hondorf, the owner and lead guide for Yellowstone Guidelines. For more information about booking a wildlife tour in Yellowstone, please call us at 406-599-2960 or send us a note, tours@yellowstoneguidelines.com.