A Day in the Interior – Exploring Yellowstone National Park in Winter 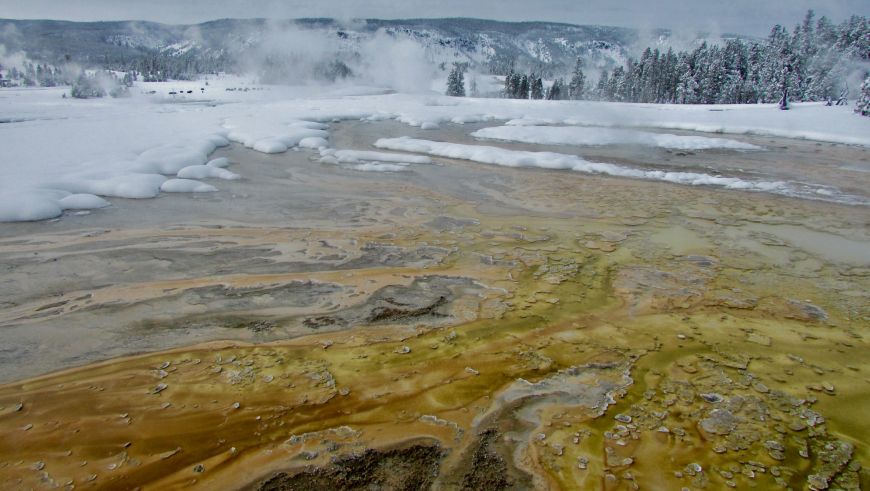 Yellowstone’s interior is where seasonal road closures block access to a majority of the park. It is a special place where winter takes hold for several months of the year. Snow covers the ground of the high plateaus as early as November, and generally melts in May. It is home to many tourist attractions including Old Faithful, the Grand Canyon of the Yellowstone, Grand Prismatic Spring, and other highlights of the lower-loop. These areas bustle with tourists during the summer months. The off-putting peak season crowds are non-existent in the winter, creating a private winter wonderland. Winter vacations in Yellowstone reward visitors with quietness and snowy bliss.

My Day in the Park

My day started in a scramble. Dilly-dallying and snowy roads left me barely on time for my 7:30 a.m. shuttle, which left from the Mammoth Hot Springs Hotel. My shuttle was with Xanterra, the park concessionaire. Xanterra operates many of the winter snow shuttles and hotels in Yellowstone, but there are a variety of private companies operating from Yellowstone’s five entrances that offer winter tours (The National Park Service website has a list of approved vendors).

My driver, Rick, is originally from Georgia but has spent many years in the Yellowstone area. He knows the park well and guides both seasons for Xanterra. My ability to retain jokes and funny expressions is limited, Rick, however, had some good one-liners. Plus, everything is funnier with a southern accent.

Rick drove a mattrax van, a van equipped with tank-like tracks. From December to March, traveling into Yellowstone’s interior requires a specialized snow vehicle. The mattrax style snow coach runs on 4 triangular-shaped tank tracks, instead of the traditional car tire. The wide surface area of the tracks, with a low-geared 4-wheel drive transmission, allows these vehicles to drive on the snow with ease. Alternate winter transportation includes vans with large monster truck tires or snowmobiles. Snowmobiles are allowed during the winter months of Yellowstone through guided services and limited self-guided Yellowstone snowmobile tours.

As we headed to Old Faithful, our travels took us from Mammoth Hot Springs to Norris, Norris to Madison Junction, and Madison Junction to Old Faithful. The length of road is about 52 miles through a snow-masked landscape. Park Service regulations keeps all winter vehicle travel limited to the designated roads, with no off-roading allowed. Luckily, we had some fresh snow on the road between Mammoth and Madison Junction that provided for smooth travel. Our first stop was Madison Junction. This is a popular winter stop because of its heated bathrooms and warming station.  Hot coffee and snacks can also be purchased there. Madison Junction is named for the headwaters of the Madison River where the Gibbon and Firehole Rivers converge. Madison Junction is also historically important. Across from the parking lot, there is a protruding cliff named National Park Mountain. National Park Mountain is said to be the birthplace of the national park idea, where Cornelius Hedges and other early park explorers discussed the idea of preserving Yellowstone and other wild areas for future generations to enjoy.

The road between Madison Junction and Old Faithful has the heaviest use during winter. Many snow coach operators and guided snowmobile tours operate out of West Yellowstone, using this stretch of road to access Old Faithful and other geyser basins in the area. West Yellowstone is the busiest entrance to Yellowstone in both summer and winter months. The road in the winter  is far from busy compared to the peak summer season. However, it gets a little bumpy in spots, from all the tracked and winterized vehicles creating ruts in the snow. 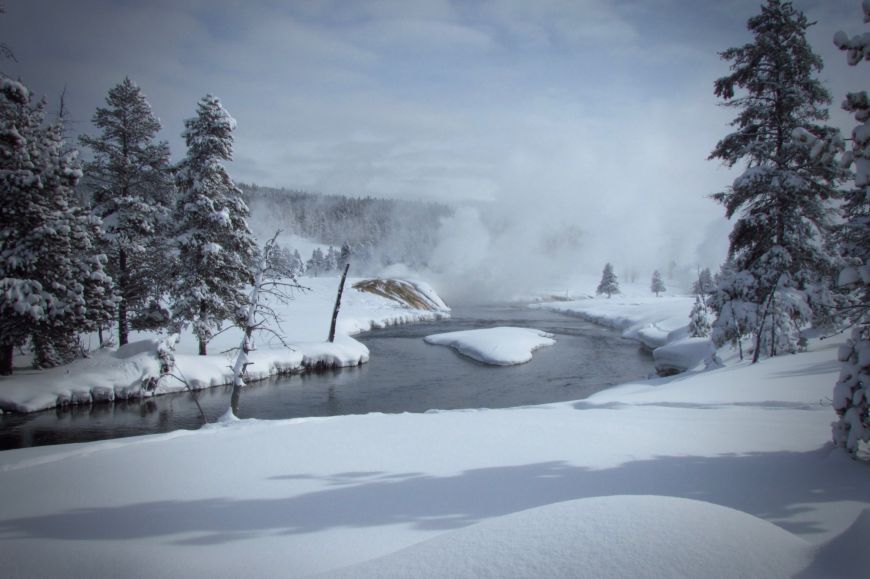 We arrived at Old Faithful around 10 a.m. Rick drove the mattrax to the front of the Old Faithful Snow Lodge and unloaded his passengers. Snow Lodge is the only hotel open during the winter from December to March. It has a full dining room, bar, and plenty of areas for visitors to warm up and relax during the cold of winter.

The Upper Geyser Basin has one of the highest concentrations of geyser in the world. Only geyser basins in Russia (Kamchatka), Chile, New Zealand, and Iceland have a greater density. The visitor center has interpretive signs and displays explaining the geological processes of Yellowstone, short films about the park, a gift shop, and clean bathrooms with flush toilets (a real highlight of Yellowstone).

I chatted with the ranger on duty about the winter vs. 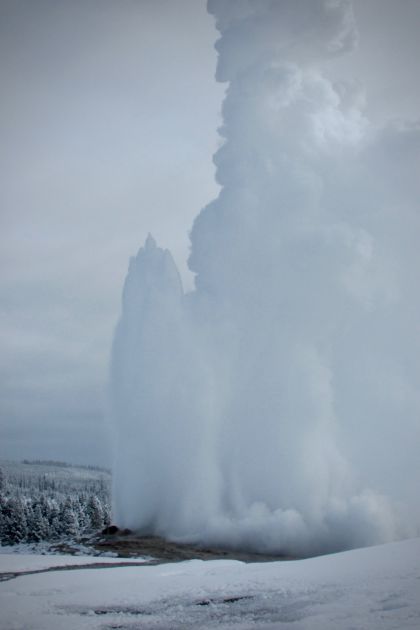 summer seasons, his preference to Alaska vs. Montana, and the recent earthquake swarms concentrated in the Old Faithful area. He mentioned a tremor occurred the previous night and may have slightly altered the 90-minute eruption cycle of the Old Faithful geyser. Very cool (and somewhat frightening)! Yellowstone, of course, is located directly on top of the world’s largest super volcano. The area has incredible seismic activity, recording between 1,500 to 2,000 earthquakes and tremors per year.

After noting the predicted eruption times of geysers in the area, I headed back outside into the cold. My first stop was to the most famous geyser in the world, Old Faithful! During the summer months, thousands of people will wait at this popular spot in anticipation of the hydrothermal eruption of this geyser.  During this particular eruption however, it was just myself and one other couple watching from afar. I have seen Old Faithful go off hundreds of times, but never in the winter. The display of hot water shooting into the cold crisp air of the Rocky Mountains creates a magical steamy creation of water vapor and crystals - amazing!

I set forth on the service road/trail that heads north to Morning Glory Pool. Walking off the maintained roads can be somewhat difficult during Yellowstone’s winter months, especially in a big snow year. Unfortunately, I wasn’t able to bring my cross-country skis and forgot to grab snowshoes. What a rookie move! If you ever plan a winter trip to Yellowstone and Old Faithful, be sure to bring (or rent skis). After much effort,  I made it to one of the tallest geyser cones in Yellowstone, Castle Geyser. Castle Geyser is thousands of years old and erupts every 14 hours, propelling water over 75 feet into the air. I trudged onward to Grotto Geyser. Grotto Geyser is an odd shaped feature that sprays water about 15 feet every 1.5 to 24 hours. Geologists predict that the uniqueness of the feature was formed from siliceous sinter covering trees.

Worried about time and missing the return shuttle to Mammoth, I decided to head back to Old Faithful Snow Lodge via the inner boardwalk of the Upper Geyser Basin. Along the way,  I visited features such as Giant Geyser, an unpredictable geyser that has erupted to heights of 250 feet and last more than an hour, Grand Geyser, the tallest predictable geyser in Yellowstone, and the Lion Group, a cluster of 4 geysers, that can grumble and roar before erupting. One of the best features in the area, Beehive Geyser, was not active. When Beehive Geyser erupts, it sounds like a small airplane taking off.

After making it back to lodge, I found the perfect seat by the fire and warmed up while I waited for Rick and his winter transport. We left the Snow Lodge at 2:30 p.m. and returned to Mammoth via the same route. More passengers joined us on the way back, as several hotel workers and park employees accompanied the shuttle. The shuttle back was peaceful.  All the passengers quietly stared out the window, watching steam in the far distance, and random groups of bison buried in the snow.

Next time my visit will be longer, ideally 3 days to allow for more skiing and exploration. Six hours is not enough time to fully explore the area. Although brief, I will never forget my first winter trip to Yellowstone’s interior, a true wonderland.