Summer 2016 - The Year of the Centennial

Summer is a loose definition in the Yellowstone area. Summer in Yellowstone is not defined by the swing of temperatures or the changing of leaves, but by road access to the park’s interior. Once the roads are closed to Old Faithful, Canyon, and the remainder of the interior for 2016, summer has come to an end. Time for winter to take hold! 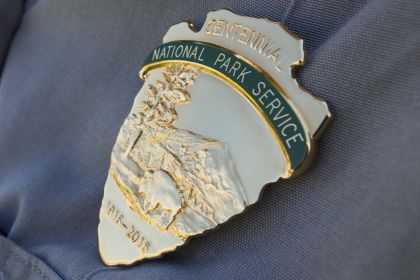 The National Park Service Centennial was commemorated in Gardiner, MT along Arch Park. Festivities were also held in other locations including our hometown; Livingston, MT. Headliners and speakers included Emmylou Harris, John Prine, Montana Governor Steve Bullock, and US Secretary of the Interior Sally Jewell. Over 50,000 people enjoyed the celebration.

The hype and advertisement of the National Park Service Centennial brought the crowds and another year of record visitation. 2016 is on track to have the highest visitation with an estimated 4.5 million people. As of September 2016, 3,970, 778 people have visited to the park, a 4.1% increase from 2015. The greatest increase was noticed with tour buses and coaches.

Problems and Management Issues
As the numbers of visitors continue to increase, locals, Park Service managers, and the general public worry about increased foolhardy behavior. This summer started off with a ridiculous one-two punch of visitor related incidents.

The first involved two visitors from Canada placing a baby bison in the back of their car. According to the kind-hearted Canadians, the baby bison appeared to look “cold” and was driven to the ranger station for care. The Park Service staff tried reintroducing the bison to the herd. The herd rejected the animal as biologists predicted the baby bison smelled too much like humans. The Park Service later euthanized the bison.

The second incident happened shortly after the first. It involved a film group from Canada. Individuals from the group were photographed walking on Grand Prismatic Spring, the largest hot spring in Yellowstone. Currently, two have pleaded guilty and others are fighting the charges. “Both individuals will be on probation for five years which includes being banned from public lands managed by the U.S. Department of Interior, U.S. Department of Agriculture, and the U.S. Army Corps of Engineers” according to the National Park Service. Stay tuned as the trial progresses.

Of course there were other incidents as well. Several deaths, animal goring, traffic accidents and someone being dissolved by a hot spring. But, that is a story for another day.

The NPS has proposed several management strategies to deal with the rise in park visitation. Strategies include capping daily visitor numbers and a park bus system as seen in other national parks. Detailed plans and proposed policies are not in place and will be subject to much scrutiny and debate.


Yellowstone Guidelines Year in the Park
We had another great year in Yellowstone. Yellowstone Guidelines was able to host visitors from all over the globe. Our guests came from India to Israel, China to Russia, and all across the United States. We executed more tours than ever before and hope to grow upon this momentum. As of November 1, we showed over 700 people the wonders Yellowstone. Activities for 2016 included backpacking tours in May and October, hiking treks, visits to Old Faithful and many other thermal basins, numerous stops at the Canyon area and the Lower Falls of the Yellowstone, along with countless hours observing bears and wolves throughout Yellowstone. We certainly covered a lot of ground this year!

We are excited to offer new activities for 2016 -2017. Yellowstone Guidelines will soon be permitted to offer guided cross-country ski and snowshoe tours in the park. The tours will cater to guests of all abilities and skill sets. Tours will start as soon as the snow starts to fall, which typically happens in November and early December. Fingers crossed for an epic snow year!

Moving forward, we will not be offering guided fishing trips in Yellowstone. We found that our clients are not that interested in fly-fishing. If newfound interest is gained, we may revisit that decision. However, we do work with some of the best fly fishing guides in the area and would be happy to recommend a guide.

A big thanks to our new staff members Emil, Molly, and Kerry who helped share their passion for the park. Their time and expertise was enjoyed by all of our clients. Thanks again and see you in Yellowstone.