Wildlife enthusiasts flock to Yellowstone from all over the world for the charismatic megafauna – the bison, elk, bears, wolves, moose and bighorns. But there is a whole other cast of wild characters that offer endless and ever changing opportunities to observe the natural world. Yellowstone hosts nearly three hundred species of birds. As you explore Yellowstone, they are all around you.

Thanks to the abundance of different habitats in the park, you will find everything from hummingbirds to golden eagles, mergansers to osprey, dippers to cranes. The avifauna of Yellowstone is as diverse and lovely as you could ever wish. Hawks patrol the meadows, ducks cruise the lakes and rivers, owls nest  in snags, herons stalk the shallows, songbirds twitter away in the forest, grouse drum in the deep woods, geese raise goslings in vast meadows, and ravens are everywhere, always up to something. 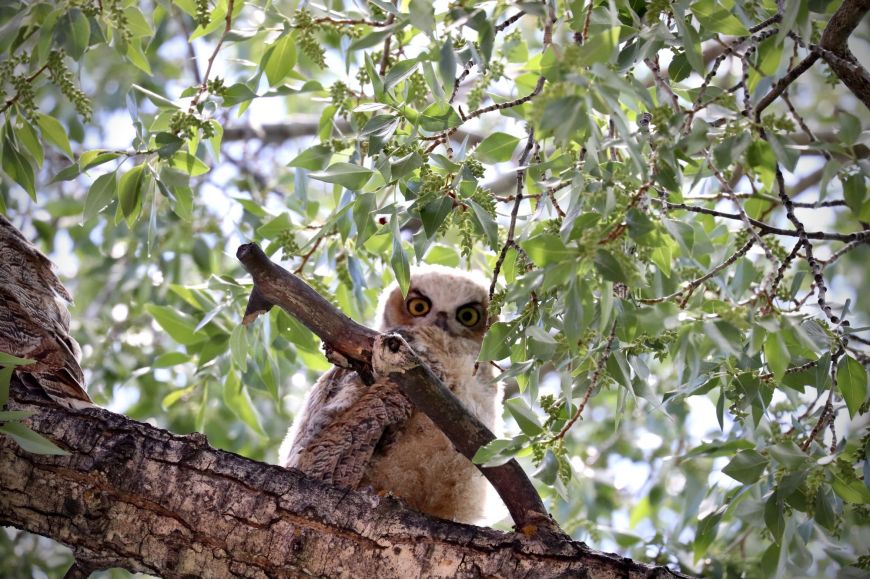 You need not be an expert to enjoy birding here. You don’t need a life list or any special skills. But a good pair of binoculars, a bird field guide and some patience can pay off with sightings of the lifetime. Take some time off from chasing bears and wolves and give the birds some attention. Consider booking a tour with the naturalists of Yellowstone Guidelines, who can get you to the best spots at the right time of day to add to your knowledge and boost your sightings.

You can also learn a lot from NPS rangers at visitor centers and on nature walks, as well as on NPS web sites. The Park Service monitors the population of raptor birds as well as songbirds and woodpeckers. There is a fascinating ongoing study of ravens in Yellowstone involving radio trackers attached to the birds.

Some birds don’t migrate and are observable here year round. These hardy few include ravens, magpies, eagles, American dippers, pine grosbeaks, and even tiny chickadees. Most birds, however, are migratory and depend on Yellowstone for secure nesting habitat.

Spring is of course one of the best times for birding in Yellowstone. Many species are arriving from the Gulf of Mexico, Central America, and as far away as Argentina. Half of the birds recorded as living in Yellowstone nest here and raise their young.

Neotropical migrants are the songbirds that spend the winter in the Tropics and come to Yellowstone to breed. Many of these are quite colorful and as spectacular as birds you might encounter in Costa Rica. Our most colorful species, mostly found in open woodlands, include Western tanager, American goldfinch and Evening grosbeak, with males all displaying bright oranges and yellows.   Other colorful birds that you might glimpse include Lazuli bunting, Yellow warbler, and Audubon’s warbler.

Mountain bluebirds and Western Meadowlarks are some of the first to arrive from their winter quarters in the south. Bluebird males are like a piece of the sky flying by. Yellow-breasted meadowlarks warble from every post and stump. Now the males must establish territories and attract mates. 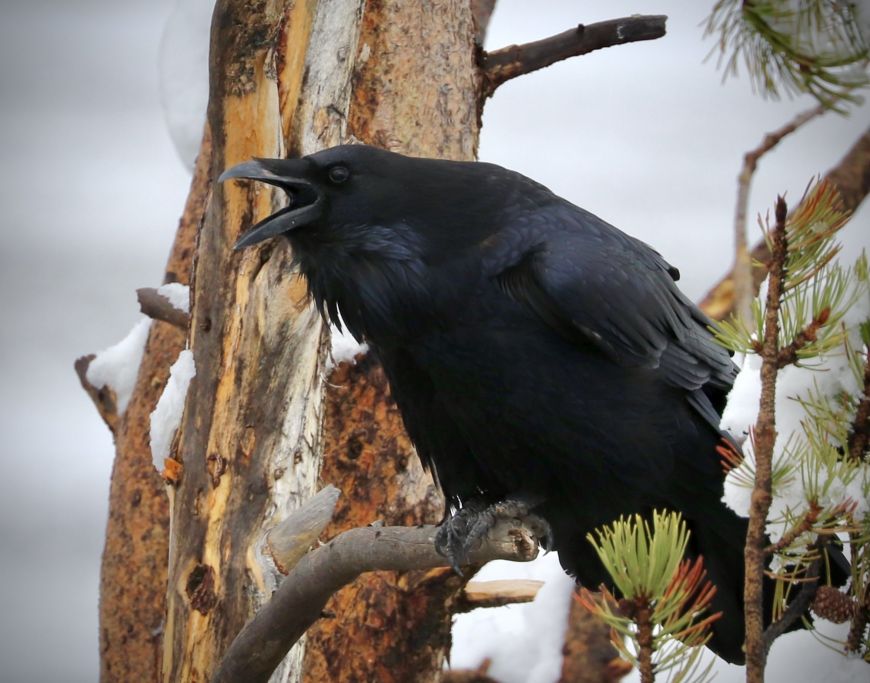 Most birds are specialists when it comes to habitat. Many have evolved specific behaviors, like the upside down creeping of a nuthatch, to reach food that is unavailable to other species.  Learning their behaviors can help you identify the bird. Each also has a unique song or call, which is usually on full display during breeding season, then the birds get quieter as they settle onto nests.

You can download and print a checklist of Yellowstone’s birds here. You can also download a variety of apps that will help you ID bird songs and appearance, such as the Merlin app or Picture Bird.

For sheer size and beauty Yellowstone’s waterfowl are hard to beat. Many visitors are surprised to see White Pelicans on the rivers and lakes of Yellowstone, so far from the ocean. But white pelicans nest and breed on remote islands in Yellowstone Lake, making them important residents of the park in the summer. Look for pelicans along the shores of the lake and in Hayden Valley along the Yellowstone River. Watch for their fascinating group feeding behavior as they round up schools of fish.

Also visible in Hayden Valley and nearby are North America’s largest waterfowl – trumpeter swans.  These rare and spectacular swans have survived here while they were mostly wiped out elsewhere. A reintroduction program has brought breeding swans to Swan Lake in the northern part of the Park for the first time in decades. Look for the big white birds on a nest at Swan Lake and keep an eye out for cygnets – baby swans – as the summer progresses. 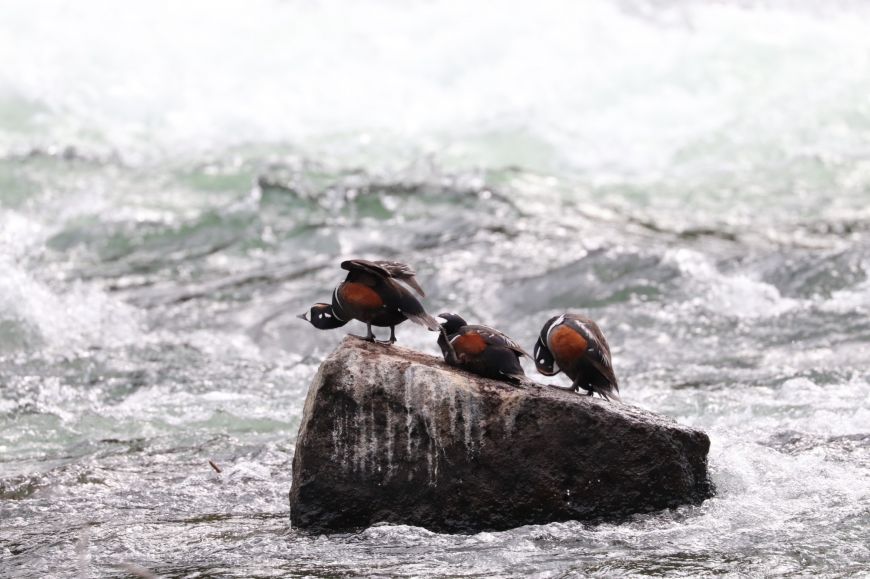 Where to See Harlequin Ducks

Another rare waterfowl species easily seen in Yellowstone are the amazing Harlequin ducks. Watch for them at LeHardy Rapids on the Yellowstone River. The males have gorgeous markings and both sexes love to swim in the rapids where they navigate the currents to catch food underwater. Harlequins can often be seen sitting on rocks in the middle of the rapids. I have also seen them on Tower Creek above Tower Falls.

Look just downstream of LeHardy Rapids for common mergansers, a species of waterfowl that patrol the rivers and also dive underwater for fish. Don’t confuse these with loons, which look similar but live mainly on lakes, and are much more rare and solitary. Canada geese, goldeneye ducks, mallards, and many other species enjoy Yellowstone’s abundant water. Look for rafts of Goldeneye on Yellowstone Lake and check the backwaters along Gull Point Drive for grebes, scaups, and coots.

Where to Find Great Blue Herons

Most birds nest in a solitary manner with nests isolated from others of the species. But Great Blue Herons have a different plan - they live and raise their young in communal nest rookeries built high in the treetops near rivers. My favorite rookery is located on an island in the Yellowstone river near the Nez Perce picnic area south of Hayden Valley. Look for the gangly young birds getting fed by tall skinny adults.

Yellowstone also hosts many raptor species – nineteen in all. Birds of prey are magnificent hunters, fierce predators that kill and eat other birds, mammals, insects and fish. Ospreys are some of the easiest to observe. These fish-eating birds are often confused with bald eagles, but look for the dark mask around the eyes. Osprey nest all along Yellowstone’s rivers and lakes and build large stick nests on rock towers or in snag trees. They winter in the southern US and Mexico often return to the same nest year after year. Look for nesting and flying ospreys in the Grand Canyon of the Yellowstone, near Tower Falls and in the Lamar River Canyon, as well as all along the area’s rivers, especially the Firehole. They are wonderful to watch as they hover and dive straight into raging rivers or cold lakes to catch trout.

Where to Find Peregrine Falcons

Another once-rare bird that has made a comeback in Yellowstone are peregrine falcons, the world’s fastest animal, able to dive at over two hundred miles per hour. They are ambush predators that “stoop” on their prey of flying birds in a surprise attack from the sky. Peregrine often nest in the Yellowstone narrows area near Tower Falls. They do not build a nest but lay their eggs on a ledge where the young must live until they can fly. Listen for the high pitched keening of peregrines as they fly – then try to spot one.

Where to Find Eagles

Both Golden and Bald eagles thrive in Yellowstone, with several nesting pairs each year. Goldens tend to nest on cliffs and soar high above the ridges while balds will nest in trees near rivers. Deeper in the forest are the silent hunters – accipiters like sharp-shinned hawks, Coopers Hawks and the spectacular goshawk. 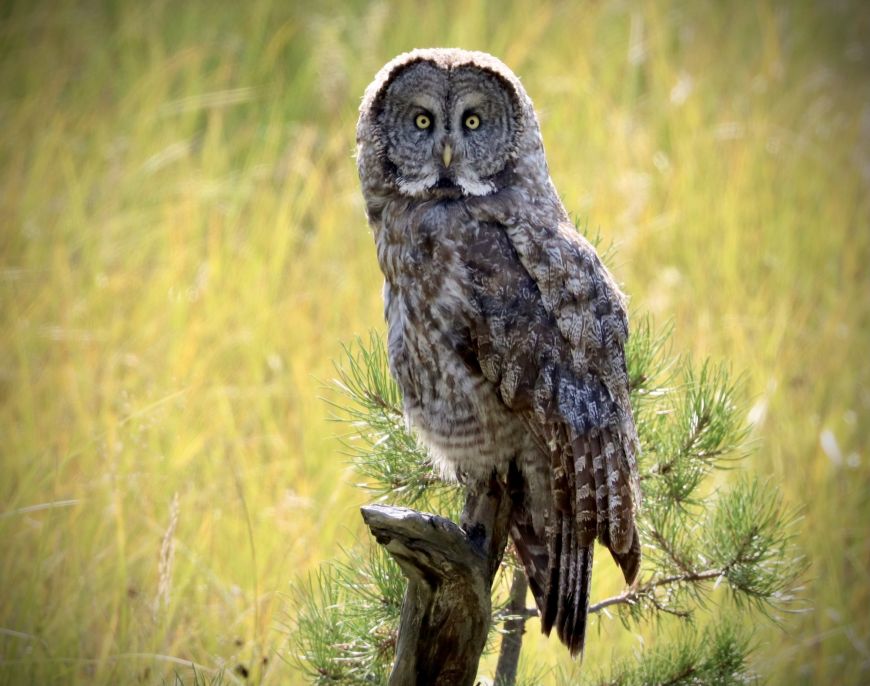 Where to Find Owls

More difficult to spot but no less spectacular are Yellowstone’s owl species. Most are nocturnal so are not often spotted, but it’s not uncommon to see a Great Grey Owl perched in a tree near the roadside, seemingly oblivious to all the human commotion. Great horned owls nest every year in the big evergreen trees in Mammoth Hot Springs, so ask around the at the visitor center for where to find them.

Where to Find Hawks

Many species of buteo hawks grace the Yellowstone skies, circling and hunting, sweeping low over the meadows or riding the thermals. Red tail hawks are common throughout Yellowstone’s open valleys, Less common are broad-winged hawks, ferruginous hawks, and Swainson’s hawks, which migrate to and from Argentina ever year. Look for Swainsons on windy days hovering over the Lake Yellowstone Hotel, parked on the updrafts like a kite on a string.

Don’t  forget the little guys. The meadows and forests and riverbanks of Yellowstone are teeming with smaller birds like dark-eyes juncos, rufous hummingbird and song sparrow. One of the most amazing is the American dipper. These perky little featherballs are found all along Yellowstone’s rivers and creeks. They are the world’s only aquatic song bird, able to swim and walk underwater to forage for the abundant fish, insects and crustaceans found there. Look for them on the margins of creeks and rivers as they bob up and down on rocks and plunge headfirst into clear water.

Some of Yellowstone’s cheekiest residents are its jays – Gray jay, Stellars jay, and Clark’s nutcracker. They are gregarious and talkative and often show up at picnic areas to beg for or steal food. Stellars are iridescent indigo with a dark crest and are excellent mimics, often sounding like hawks. Clark’s nutcrackers may be seen busily gathering pine nuts to store for later consumption.  They are intimately tied to the life of the Whitebark pine which grows at high elevation in the park. 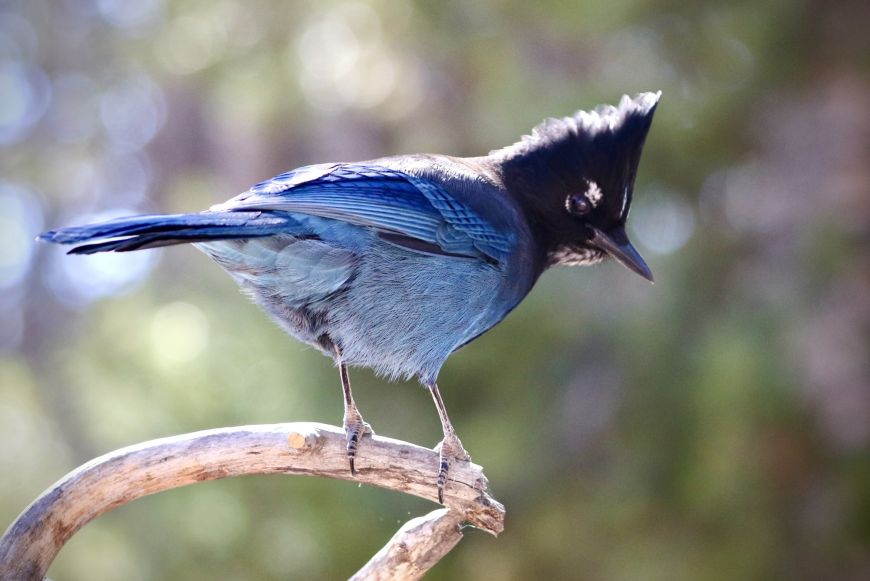 Where to Find Cranes

Surely one of Yellowstone’s flagship species is the Sandhill crane. So tall and long legged their young are called colts, cranes look and sound like something out of the age of dinosaurs – which they are, as birds are what remain of dinosaurs. Sandhills love open, wet meadows to stalk around in. When they fly they make an unforgettable rattling cry.

Whatever your bird preferences, Yellowstone will not disappoint. Birds add color, beauty, song, and endless movement in the vast rolling terrain of Yellowstone. Come and take a look and keep your eyes to the wide open skies.