A Spring Journey to Old Faithful

On the morning of April 20th, portions of Yellowstone’s Grand Loop Road opened for another season. The opening of Yellowstone’s interior is the official kickoff to summer in the park. One of our guides, Frank Hessler, was lucky enough to drive down to Old Faithful for a day of geyser gazing and geology. Here is his tale of the day and a little geology lesson to boot. 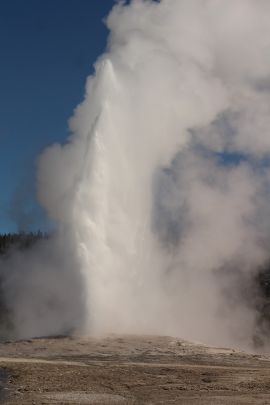 “Once a year there is a time that I personally get very excited for - the opening of the roads into Yellowstone National Park. They close yearly in October or November and re-open toward the middle end of April. During this time, the only road that is accessible to regular wheeled vehicles is from Gardiner, Montana to Cooke City, Montana. Not saying this is a bad thing but I have a love that has been built up over the years for one unique feature - geysers.
​

Yellowstone National Park is home to more than 14,000 thermal features - the highest concentration on our big blue planet. There are four varieties of thermal features. Hot springs are beautiful to look at, but stay constantly the same (although some may become geysers because of the underground working of the Earth). Fumaroles, or steam vents as they are also called, have water underground and produce heavy amounts of steam that never reaches the surface; these are the hottest of the features. Mudpots consist of bubbling acidic mud that you would not want to use as a face-mask. As the summer moves on, they become less active and produce a dried mud shell around their vicinity. Then come geysers.

​Geysers are hot springs that eject water into the air. They come in two varieties, cone geysers and fountain geysers. Cone geysers are the stereotypical geysers you think of like the world famous performer Old Faithful. Water builds up underground and they have a cone formation on the surface. This cone is made of siliceous sinter, or geyserite as it is also known. Basically, it is a water-deposited form of opal that is not gem quality. The cone geysers have beautiful built-up cone formations. They will eject water in a single stream with a steam phase to follow. Other examples of cone geysers are Beehive, Giant, Grotto and Riverside.
​

Fountain geysers are the other type. They look like your average hot spring pool but there is something different about them. After an eruption, the pool will start to fill up until it starts to overflow. Once this happens, depending on the geyser, an eruption will eventually be attained. The eruptions from a fountain geyser happen in a series of bursts from the pool. Some go for a short time while others go for hours on end. The most famous of these is definitely Grand Geyser, the most predictable of the large fountain geysers. My personal favorite is Great Fountain Geyser; this was the first geyser that was ever seen by an expedition into Yellowstone in 1869 by the Folsom, Cooke and Peterson party.
​

We did have a good geyser day, but no fountains in our experience on the second day that the park roads were opened. We did catch a rare performance of the unpredictable Beehive geyser just as we drove up. The beehive has a small geyser that is attached to its plumbing system ironically called Beehive’s Indicator (although its not always associated with an eruption of the big guy), which was going off. It went two minutes after arrival as I scooted as close as possible to get a look, some photos and a bit of video footage.

After we watched Beehive do its thing, we headed toward the visitors center to check on the predictions of other geysers. Old Faithful gave us a show, less than 10 minutes after Beehive. We then headed inside the visitors center where they have a screen with predictions for the major geysers on it. I always like to take a photo of that so I can look back at it and try to make my way around the Upper Geyser Basin in an orderly fashion to see as many of these wonders of the world as possible.
​

We started heading out toward Daisy Geyser and ended up waiting there for about an hour, but it gave a good show. We think that the prediction was an hour off, but it was the second day the roads were open. After Daisy, we headed toward Riverside Geyser, which is always beautiful, especially when you get the rainbow effect when the sun is at the right angle (which we did not). We waited there for about another half hour and it gave us a show.
​After these beauties danced in the sunlight for us we started making our way back along the boardwalks toward the Old Faithful Inn where or car was parked. We stopped at Spasmodic, which is really fun to watch if it’s going - small but furious. We headed back toward Castle Geyser and saw a second Old Faithful from the bridge over the Firehole River. 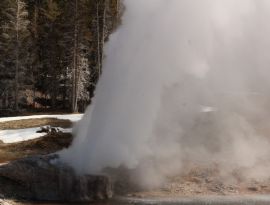 This was a great first geyser day for the 2018 season. We are hoping that there are many more days just like this or better.

As we made our way back toward Livingston, we took it slow and enjoyed moving along the roads of the park that we love. There is a bit of snow still up there, but that never stops those that have a love for this place. The best part of the whole ordeal is that the National Park Service(NPS) made it possible for us to get through after they said a couple days earlier that the construction zone was impassible. Thanks NPS for protecting these special places and making them accessible. See you in the park!”

Frank Hessler is a guide for Yellowstone Guidelines and will be leading more great tours this summer. To book with Frank and our staff, visit us at www.yellowstoneguidelines.com.