Do you know the best part of Yellowstone National Park? Well, that’s a trick question. Everything is great about this park!

Most recently we took some clients on a rather large, epic-backpacking trip into the southwestern region of the park, the Bechler, or otherwise referred, Cascade Corner. This area is known for it’s large concentration of waterfalls, open meadows, epic fishing and wonderful thermal features. Lets take a quick version of our long walk and dip our toes in the waters of the Bechler. 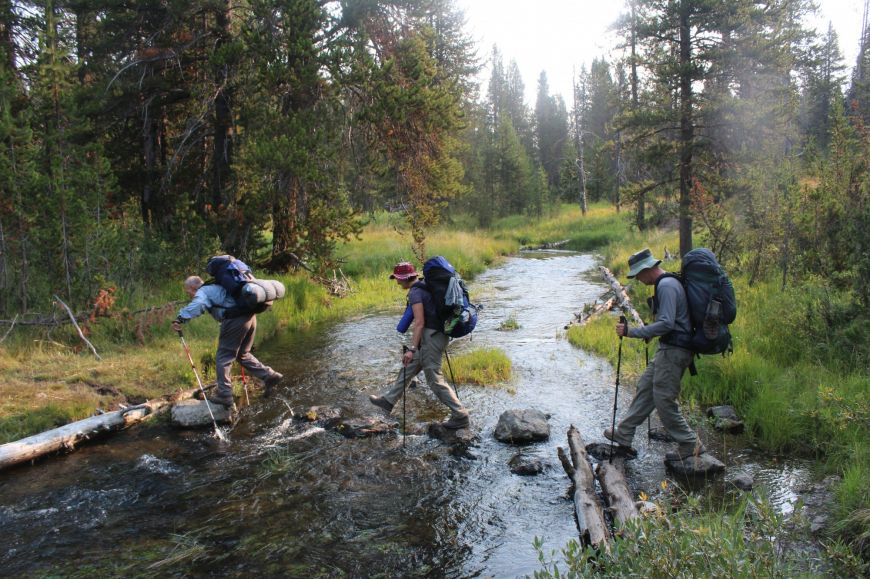 The Beginning - The Start Of an Adventure

The first day of the trip we met up in West Yellowstone where we hopped in our van. From West Yellowstone we headed south to Ashton, Idaho where a dirt road heads towards the Bechler Ranger Station. It was a nice road where we only met a couple vehicles before we reached the station. When we got to the trailhead we readjusted our backpacks, divvying out the group gear and food amongst all of the participants including yours truly.

Once we got all adjusted we stopped to check in with the ranger in the station. The original Bechler Ranger Station was built during the army’s residence in Yellowstone from 1886 to 1918, it was built in 1911. There are two more ranger stations that date to that era left in Yellowstone including the Tower Ranger Station and Museum of the National Park Ranger at the entrance to the Norris Campground.

Our first day was very short, just less than 4 miles; it was a flat hike thru some beautiful woods that paralleled the Bechler River at points. We got to base camp and hung out and got acquainted a bit while we set up camp. This was the only campsite of the trip that a fire was allowed at so we took advantage of that. Wood was not too easy to come by as this is a very popular area of the park but we managed enough to have a nice blaze.


We woke and broke camp in the morning. Our friends from England saw a moose in the morning that the rest of us missed. The early bird gets the worm as they say. Today was our first big hike of the trip.  As we made our way towards Bechler Meadows we had to cross our first stream. There are many fords of this trip. Where you must cross the river on foot with all of your gear on you. The major reason that backpacking the Bechler is not advised until later in the summer is high water from spring melt off.

The Bechler Meadows were very large and beautiful but quite brown at this point. It was very dry which is good for hiking this trail. If you hike it in the fall you avoid the high water and also the bugs, mosquitoes and biting flies. After crossing the meadows we came to the Bechler River ford. This was the first of a few fords on this trip. Being the guide I took the lead and found the best route. All made it across with no mishaps.

Once across the Bechler we started making our way up the canyon where an abundance of waterfalls can be found. The three falls that are seen from the trail are Ouzel, Columnade and Iris Falls in that order. Ouzel is barely seen from the trail but the others are seen more easily in their entirety. 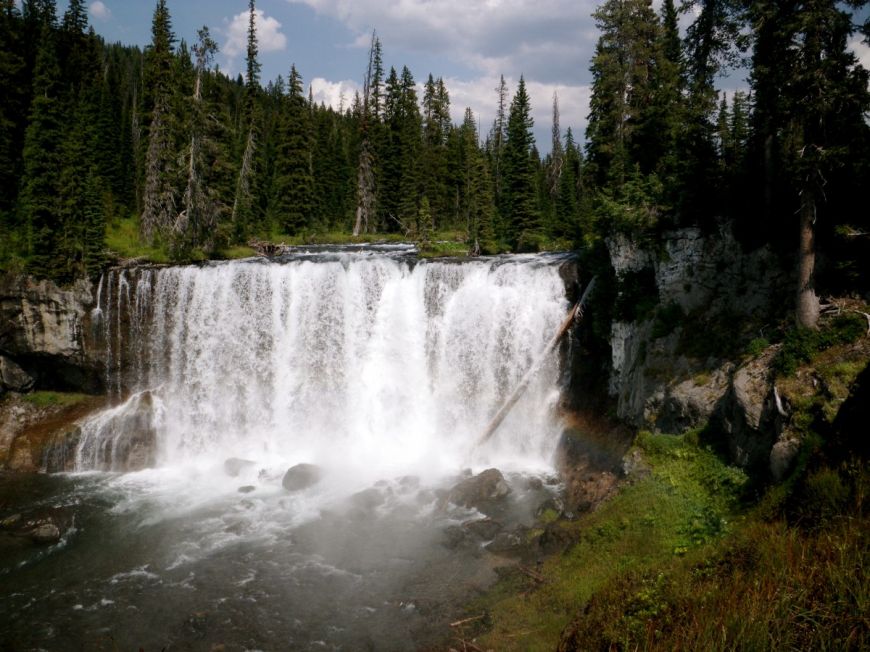 After making our way along the river we came to our next ford of the day, this was the toughest of them all on this trip. The rocks were larger and there were a few deeper holes in the Bechler to avoid. We got advice from some fellow hikers on where the best place to ford would be to our advantage. Everyone made it across with no problems.

After this ford we made our way further north and uphill on the west side of the Bechler River until we made our way to the final ford of the trip. This was the easiest of the fords and very close to our campsite at Albright Falls. It was a long day of meadows, fords, uphill hiking and waterfalls, well worth every second. We ended the day with some nice freeze-dried meals, which are super light and pack a good caloric punch. I hope you like a lot of white noise, because the water tumbling down the 260-foot Albright Falls is right in the campsite and rushing like crazy.

Day Three - The HEart Of the Bechler River Trail


We woke up early this morning and made our way thru the fog and cool air towards our breakfast destination.  As we hike north we are getting further into the super volcano caldera, which erupted a mere 640,000 years ago and continues to fuel the unique thermal features we see along the trail. Geologic processes are the reason that Yellowstone as we know it is here.

The Ferris, Gregg, and Phillips Forks create the Bechler River at the Three Rivers Junction. Right near this junction is our breakfast spot of choice, Mr. Bubbles. This legal soaking spot, (one of very few in Yellowstone) is located on the Ferris Fork to the east of the Bechler River Trail on a spur, which is about a half mile in length.

There are some wonderful thermal features along this spur trail on the Ferris Fork.

Most are VERY hot and dangerous. Mr. Bubbles is a big bubbler type thermal feature in a little cove on the river, there is also a thermal stream that feeds into the same cove, and it’s pretty awesome! These both mix with cold water making it legal to soak in, just like the world famous Boiling River.

After soaking and making freeze dried eggs burritos with coffee for breakfast we started heading north for another long day hike. We made our way up and out of the Bechler River Canyon and stopped to see Twister Falls on the way. We made our way thru the forests of mostly lodgepole pines and obsidian coated ground where a few mushrooms dotted the forest. Eventually we made our way to a wet meadow that we had to cross. At the far end of the meadow we pumped water from a stream and made our way back into the forest to our campsite which was not too far from the next days destination of Shoshone Lake and Geyser Basin. 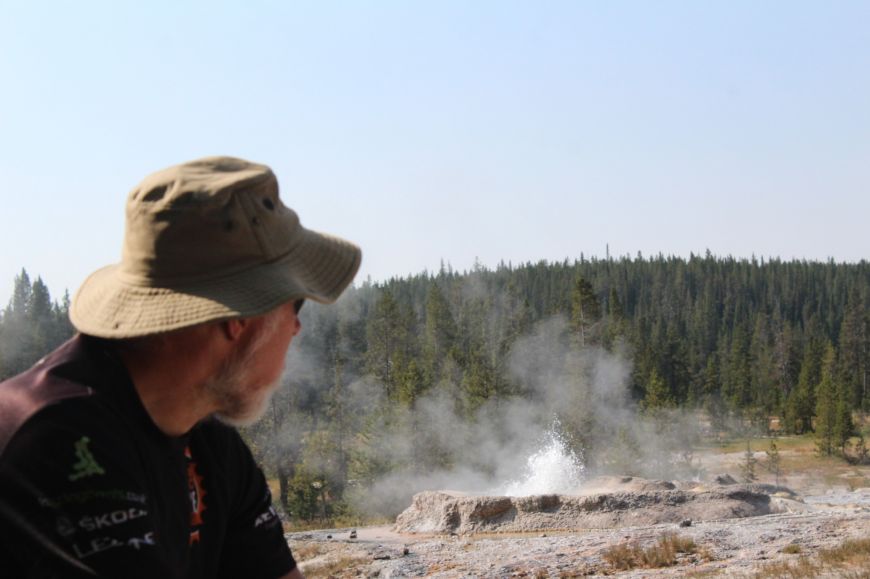 We woke up and had some breakfast and coffee per regular routine and hit the trail on our shortest day to the campsite nearest the Shoshone Geyser Basin, Basin Bay Point. It was a great campsite located to the east of the basin across a small shallow bay. We were glad to be at Shoshone Lake as everyone took a dip in the waters to cleanse ourselves.

This was the most relaxing and chilled out day on the trail. We took the short trip to the geyser basin and saw some wonderful geysers in actions and other thermal actions. It was very hot so we found a couple of small shaded spots and watched for a bit then headed back to camp. There was more swimming that ensued because to the warmth of the day.

The campsite has a great view to the west over Basin Bay therefore affords nice sunsets. We had a few clouds in the sky and got some pinks and purples, it was nice and pastel like. After sunset we all sank into our tents with an early wakeup call to head out in the morning for an early hike of around nine miles.

Final Day - The End of an Adventure


We woke up early and broke down camp for the last time on this adventure. Life is different when your house is on your back. If your desire is to get out and see these places that are tucked away deep in the backcountry this is how it happens. You carry your tent, sleeping bag, sleeping pad, snacks, meals, headlamps, batteries, and everything you need on your back. It’s quite the ordeal but well worth it. 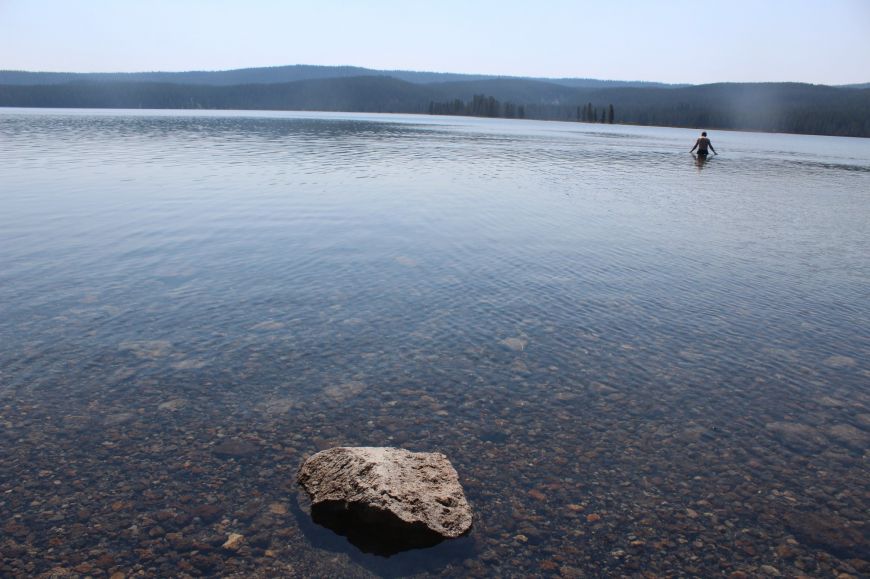 We made our way up and over Grants Pass for the last major uphill of the journey. There was no sign to designate where the pass itself was but once you start going downhill you know you’ve been to the top. We made our way thru some more lodgepole forests and eventually met up with the Firehole River.

The Firehole River runs thru the Upper, Middle and Lower Geyser Basins and then meets the Gibbon at Madison Junction to form the Madison River. The Madison is one of the tributaries that eventually becomes the much larger Missouri River. Any how this is way further down river than we actually are near Lone Star Geyser.

We eventually make our way to the geyser after passing a few campsites, going across some swampy meadows on wooden boardwalks and walking by a solo very large bull bison. He was not too close to where we were, but if he had been you know we would have used an alternative route to get around him. All animals in Yellowstone are wild and should be treated that way.

Lone Star Geyser, (no named for the Lone Star State, but for being such an outlier of a large geyser) erupts about every three or so hours. We got there and no one seemed to actually know when the geyser had last had a major eruption. It does have smaller eruptions called minors as well. We waited around for quite a while with some action but none major happening and had to meet our shuttle at 3 pm. We finally decided that it was time to go and a minor eruption happened. It was great to see.

The last lag of the trail is an old partially paved service road that meanders along the Firehole River. It is very easy going and serene to be walking by such a nice river. There were some swimming holes that looked like they could be perfect for a scorching summer day or filled with trout of world renown. This was a perfect way to end the hike, meeting many people along the trail was a great way to ease back into society after being immersed in the wilderness for four nights and five days.